﻿The Red Moose Coffee Hus has quickly become the hub of a revival coming to downtown Tioga, ND.  I sat down with Jenny Norgaad owner of the Red Moose, to talk about the inspiration behind the coffee house, and all the work that went into creating a space where everyone feels welcome. What inspired you to start the Red Moose Coffee Hus?

I’ve been here about 9 years.  We moved here from Minneapolis with our small kids, and often I would meet friends at a coffee shop.  There really wasn’t any spots like that in Tioga, where moms with small kids could come and meet up, or just get out of the house.  So it’s been on the back of my mind since we moved here.

We bought this building back in 2010 and rented it out to oil field companies.  When things slowed down and the company that was renting it gave their notice, I said to my husband “Maybe now it’s my time to do something fun with the building.”

How many renovations did you have to do to the building?

In 2010 we did the first round of renovations.  We bought it from American Family Insurance when they owned it, they had red white and blue signs up around the outside covering up the leaded glass windows, so we didn’t know that was there until we started work on it. There were a suspended ceilings, there was carpet over layers and layers of linoleum. We restored the floors, so lots of sanding and polyurethane.  We also added the kitchen and a bathroom as well.

When we decided to do the coffee shop we had to do a little more work.  We did a lot of painting, and patchwork to the lathe and plaster.  In the back room alone there were some really bad cracks that my husband put 100 pounds of plaster! We also had to rework a lot of the kitchen, to meet health codes as well as the bathroom to be ADA compliant. We also replaced a lot of the windows this time around.

The lights that are on the ceiling are original! When we took the suspended ceiling down we found them hanging there.  Some of the globes were off but we found them in the basement! So I have to ask, where did you get the inspiration for the name, Red Moose Coffee Hus?

It started with the logo.  I like the art and aesthetic of it.  So I started with a red moose, and then coffee hus rhymes, and we are in the Scandinavian area so it just works! What has been the best part of having a coffee shop?

It’s definitely been the social aspect of it! In the beginning, I had so much fun with the renovation when it came to painting, and doing the work. But it was such a fun surprise when it was time to open, how much I enjoyed the social aspect.  Actually, when it came time to open, I had hired the girls and Cody.  The girls asked if we could open, there were still tools out on the benches, and the back half wasn’t ready yet, but the girls got on social media and we opened the doors August 19th!

I really liked the building and renovation, I wasn’t sure I wanted to actually make the coffee, but that was another surprise it was actually really enjoyable! What has been the most challenging?

The first hurdle was the inventory.  We just weren’t sure how much to order, or what to order but we got it figured out!

The next hurdle was trying to figure out how many people to employ. It was tricky because I didn’t want to hire someone and then not have enough hours to them. So it’s definitely been a balancing act. Another challenge was originally I had hired a bunch of 14-year-olds, my daughter and some of her friends, then two weeks later I found out that they are not allowed to use the steam generating equipment. So they can’t froth the milk. If they are on either Cody or I have to be here to do that.

So what are the peak rush times for you?

Definitely morning and then again the afternoon chunk when the high schoolers come in after school gets out.

What was the inspiration for bringing in work from local artists?

Probably just the fact that I love to do art, and just talking to friends to see who was working on what this created the perfect opportunity for local artists to display their work, and show what people are doing.  We are happy for anyone to bring in work.  We just ask if it hasn’t sold within about a month that they rotate out their work.

How can people rent out the back room?

We just ask people to buy a $10 coffee house gift card, it’s a good way for us to know its reserved, and people can use their cards during their meetings or events! It’s been really successful

We have had a lot of people use it! The homemakers use it for their monthly meetings, we have had parties held back there, Lula Roe.

What is your favorite drink?

Vanilla bean latte! I started with caramel latte, but they were a little too sweet for me!

What has been the most popular drink?

Definitely, the frappes 24 ounces, go big or go home! They do all flavors though, caramel, white mocha.

Next would be the Northern Lights- the Red Bull drinks

What has been the most surprising drinks people have ordered?

It surprises me how popular the Red Bull drinks are.  I’m a mom who wouldn’t really want her kids to be drinking that much red bull, but everybody seems to really like it, and they mix all sorts of flavors with them!

So do you feel like you know everyone by their orders?

Yes! Cody is actually really good at it! He’s actually said that he feels like he’s bad with names, but he knows people by their orders! I’m not as good as him but I’m working on it!

What are some drink specials that will be coming up?

For Christmas, we will be getting in some hot apple cider, and some peppermint patty flavors as well! Do you have any upcoming events?

I have been talking with the art teacher up at the school, Miss May, about doing some small art classes in the back room.  We have also been talking with some others about doing some evening events, either having some local artists come in and sing, like Carrie, or Jim Booth.  Nothing has been set in stone yet, that’s just some ideas we have been throwing around, that hopefully, we can make happen in the near future!

Are there any other new things you would like to mention?

Our breakfast sandwiches have really become a big hit! We have ham egg and cheese, and sausage egg and cheese sandwiches. We just added donuts to our menu as well! We have old fashion glazed and the cake donuts as well! They are so tasty!!

Stop by and visit them at 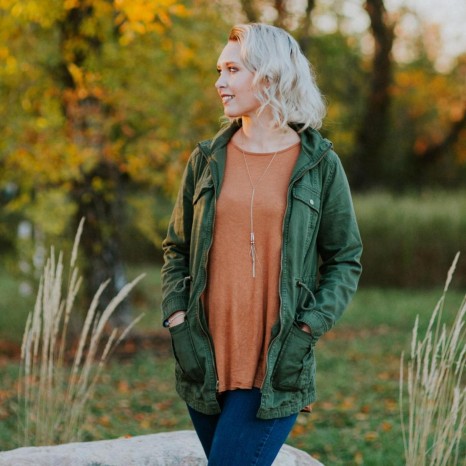 Hello I’m Chelsy! I’m a ranchers wife raising two kids in the oil fields of North Dakota. I am a wedding photographer who was once a rodeo queen in high school. I like my coffee sweet, just like my wine! I have a pretty extensive bucket list, and spend way too much time on Pinterest. I've got big plans for life, but I'm trying to enjoy the season I'm in right now! Hello I’m Chelsy! I’m a ranchers wife raising two kids in the oil fields of North Dakota. I am a wedding photographer who was once a rodeo queen in high school. I like my coffee sweet, just like my wine! I have a pretty extensive bucket list, and spend way too much time on Pinterest. I've got big plans for life, but I'm trying to enjoy the season I'm in right now! Read More about me Back at Mayo Clinic